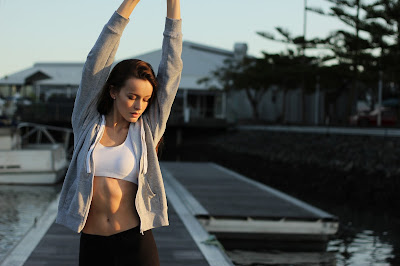 
Physical activity, there is no denying how good moving our bodies can make us look and feel.  The benefits are endless, and ours to enjoy once we get good old motivation on our side and create a habit out of engaging in some form of physical exertion a few times a week.

As a previous pilates devote, I was all for combining stretching with strengthening to achieve the toned slender physique of a dancer, but I got bored with the same old pilates sequences.  My insides used to groan every time I heard: Okay, so now let's get into position to do the saw.  I was sick to the back teeth of the bloody saw!

I decided to take a break for a while.  And generally didn't do much in the form of working out apart from walking everywhere - which is something that comes naturally to me, as I've always enjoyed walking (plus I don't drive - the DVLA don't trust me enough to grant me with a license, after three failed attempts at passing my test, I came to accept that I wasn't meant to drive).  During my exercise hiatus I began my exploration of meditation and its wealth of benefits, and as a natural progression, became really curious about yoga.  Yet I was put off, and slightly intimidated by yoga.  I have extremely tight hamstrings, and am no where near as flexible as I thought I needed to be to practice yoga. Don't get me wrong, I still gave it a shot, but I think somewhere along the road it became more about a competition with myself to see how deep into a stretch I could get - no longer yoga, more like torture stretching!

So I turned my attention to general bodyweight exercises, with some weights and HIIT thrown in.  And wow! did this shit work!  And once I got over the initial I seriously can't be arsed doing burpees today I experienced some wicked endorphin highs following my work-outs.  I felt like I could conquer the bloody world!

I got bored.  No matter how creative I got with my circuits, and no matter how much I switched things up, I just became super complacent with the whole shebang.

I was at a fork in the work-out road.  I didn't want to stop completely, because I had developed some seriously awesome oblique shit, and I didn't want to turn all jelly.  I also didn't want my work-outs to become a chore which I dreaded. As soon as that happens, my heart dismisses itself from the process, and then none of it ends up being beneficial to my well-being.

Here's where I revisited yoga, specifically Ashtanga yoga.  Well known for creating bodies of solid awesomeness, and a sort after toned physique.  And what I found this time round, was that due to the strength I had built up from engaging in bodyweight circuit training and HIIT I could perform the asanas in a much more controlled and engaged way.  I finally learnt that yoga isn't all about being bendy Wendy, and having the capability to wrap your feet around your head.  It really needs a foundation of strength to support that flexibility.

This then led me to understand what my old dance tutor at college had told me about increasing the width of my straddle stretch - with strength comes the flexibility - and less the likelihood of injury.

So for the moment I'm committed to maintaining a consistent Ashtanga practice - nurturing body, mind and soul.
Posted by Unknown at 09:23