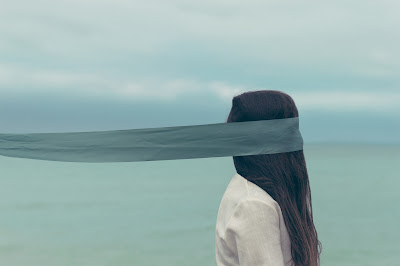 
It was a Friday night.  Wintry, dark and cold.
Late.
The perfect time for melancholic examinations of self and purpose to commence.

The questions began to roll into her conscious mind.  Red wine, cheap red wine will advance this process and allow for the momentum required to get to the bottom of this matter.

Class yourself as a feminist?  What, because you read a bit of Simone de Beauvoir's "The Second Sex"?  And basically, it's just placed strategically upon a shelf on display in your living room?  That's keeping up (false) appearances my love, don't kid yourself!

So what, you know who Donna Harraway is.  Who gives a shit that you "think" you understand the concept of the Cyborg Manifesto?  You grasped it - barely - I use the term grasp in the lightest possible sense of the world.

So she steals others thoughts.  An accumulation of theivery of other's ideas and constructing them into her own identity.  She's a basic mis-match of other's identities - masquerading them as her own.

Stealing thoughts and then proceeding to throw them around carelessly into conversations in an attempt to feel cultured and educated.  What a fucking delusion.  What a fraud!!

Who the fuck am I?

How many coke binges does it take until you can class yourself as an addict?

How many men do you have to sleep with to class yourself a slut?

Why the need for categorization?
Is it even important?

If you don't know who the fuck you are, I assume it provides comfort to be able to place yourself somewhere.  In some way it helps you make some sense of it all?

She played the part of the broken girl for years.  Damaged.  Starving herself, inhaling shit up her pretty little nostrils in an attempt to appear more interesting, less dull.

Ironically (but not surprisingly), all that shit just made her dull.  It dimmed her light, and extinguished her soul.  And now she plays the victim card, complaining that she is lost.

But she wanted to be lost?

The Universe is confused by the manifestations of this creature.  She gave her all that she wanted.

Play a part for long enough, and the pretense becomes the person.

She sat uncomfortably with her thoughts.

She had created this life for herself.

So she did what any sane person would choose to do in such circumstances, she vowed to never again drink a cheap red and contemplate herself at the same time, ever again!

She also decided that from this exact point she was primarily responsible for her life.

She was done playing the damaged card.

She was done with judgement and harsh self-criticism.

She was done with the pretense.
Posted by Unknown at 02:04

Email ThisBlogThis!Share to TwitterShare to FacebookShare to Pinterest
Labels: a tale, acceptance, manifestations, questions, self examination, self love, who am I